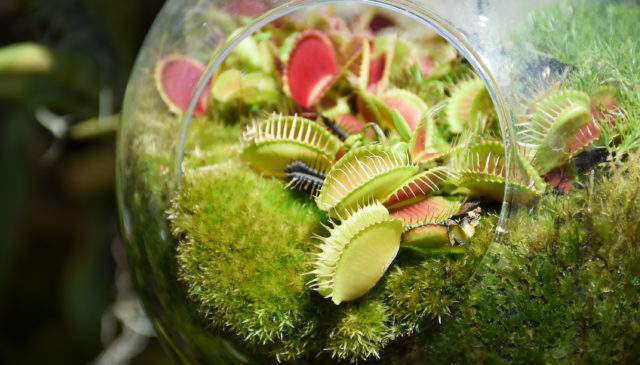 How To Make a Venus Fly Trap Terrarium

Venus Fly Traps are one of the most famous carnivorous plants to have in your house. It is just so fascinating to watch as they gobble up insects and digest them. However, there are reasons why the Venus Fly Traps are starting to decline. One of the biggest factors is the maintenance needed for it to live. Hence, if you were ever to consider having venus fly trap at home; to make things worse, in a terrarium, you might want to pay attention to what we are about to share with you.

This article will explain or discuss:

Let’s get started. Here are the items you need to build  your Pitcher Plant Terrarium

How does Venus fly traps capture their prey?

Well, one of the most exciting points of a venus fly trap is its ability to shut its two large lobes. The Venus fly trap can secrete nectar scent to lure insects in. When the insect flies towards it and lands on the Lobe, this is where the fly trap would shut its mouth, trapping the insect inside. Digestion will then take around a week for the insect to be completely disintegrated.

Most Venus fly traps need a dormant period for around 3 months during the winter period. During this period, the large mature leaves on the top will die off, leaving small shoots at the bottom. Most people mistake this for it dying off and throwing them away.That would be a wrong example as what the plants are doing is to prepare it for passing the cold winter.

Without the source, how do you get the outcome? Finding a Venus fly trap seed is rather difficult nowadays. This is due to its poor adoption of living in the modern era. The amount of these plants are decreasing. If you’ve really considered purchasing some venus fly trap seeds, it is best to search for them online. We doubt you could easily find them in your location vegetation stores. However, due to its rarity,  make sure the seller is reputable before you purchase them. This is to prevent any scams from happening.

The second thing you might wanna do is to look for a suitable container for your venus fly trap. If possible, look for a container that is big enough to support its own ecosystem. In a while, we will discuss it, but for now, the main priorities go to its size.

You can always reuse old aquariums if you have any. If not, we suggest you get one online. One other essential thing you should consider when choosing your container is to have a sealed roof. This is to prevent water from escaping the Venus fly trap terrarium, keeping it nice and moist. The design of the container is fairly important as it decides how much water the venus fly trap is able to receive.

As for the design, be a little more creative with it. The sky is your limit. make sure that the soil you are using is suitable for the Venus fly trap. We suggest looking it up on the internet in advance before purchasing. Next, select other plants that may be suitable to co-exist with your venus guy trap. The plants you choose should not be overly competitive with your venus guy trap in terms of water.

If you are familiar with closed terrariums, you should know that a closed terrarium provides a complete water cycle. This means that you wouldn’t need to water your plants every day. One thing about venus fly traps is that it is unable to absorb water with too much mineral. For instance, Tap water would be reasonably deadly to this plant as high concentrated minerals are present. Its most preferred water would be rainwater, which is perfect for the venus fly trap terrarium as water vapour created in it is in its purest form.

A venus fly trap requires much warmer temperatures around 85 – 95 degrees F. During winters, it is able to withstand as low as 30-50 degrees F. In that case, you may want to consider investing in a heater for your venus fly trap terrarium. This way, you would be able to control the temperature for your fly traps needs.

Remember us mentioning a large container with a closed roof? Well, this is because you are about to add some micro faunas to it. Venus flytraps dissolve insects as nutrients. Hence, you can breed some insects in the artificial ecosystem which you have built. You wouldn’t even need to worry about not having food for your venus fly traps as the insects will feed on other plants in your venus fly trap terrarium and provide food to the venus fly trap. A perfect life cycle is now formed.

If you were to choose a container without a roof, the insects would just come out of it. Surely you wouldn’t want that to happen now, do you?

Although the venus fly trap may look weird, it is still a plant. Hence it still needs light to go through photosynthesis. Venus flytraps also enjoy the light. However, your venus fly trap terrarium ecosystem may not be able to support intensive direct sunlight. Hence it is best if you invest in an artificial light that can be attached to the roof of your aquarium.

With that, you’ve basically made yourself a perfect Venus fly trap terrarium. However, there are still some questions about it. For instance, do I still have to fertilize my Venus fly trap?

Well, technically, you don’t have to, as the primary nutrient for venus fly traps are insects. However, let’s say that you are afraid of bugs. In this case, it would be fairly impossible to recommend you to breed flies in your venus fly trap terrarium, right?

In this case, no worries. Just get some fertilizer and fertilize your venus fly trap once every 3 to 5 weeks. With that, they should be good to go.

On the other hand, not all insects are suitable to coexist with the venus fly trap. As a matter of fact, some bugs are rather deadly to them. For one instance would be aphids. They can kill your venus fly traps relatively fast.

Sometimes, unwanted pests may even land on your venus fly traps. They are called spider mites. These insects are so small that they can easily slip through the lobes’ cracks when it is shut. They usually appear as little red or black dots, hence being quickly to miss look upon.

There are some instances when people report that their Venus Fly traps are turning black. This means that there is too much nutrient available in your soil for your plant. A venus fly trap is only able to survive in nutrient-poor soil. An excessive amount is deadly to the Venus fly traps. It is recommended that you use sphagnum peat moss mixed with lime-free horticultural sand instead.

Sunlight is also another problem. Venus fly traps just love the sun so much. It requires full sun for it to be healthy and beautiful. There is a chance that your venus fly trap turns black if given insufficient sunlight. You may think that direct sunlight is cancer to it, however, it may just do the opposite instead. If you are unable to provide 100% sunlight every single time, you can choose to place it under the sun every once in a while to ensure that minimal back appears on it.