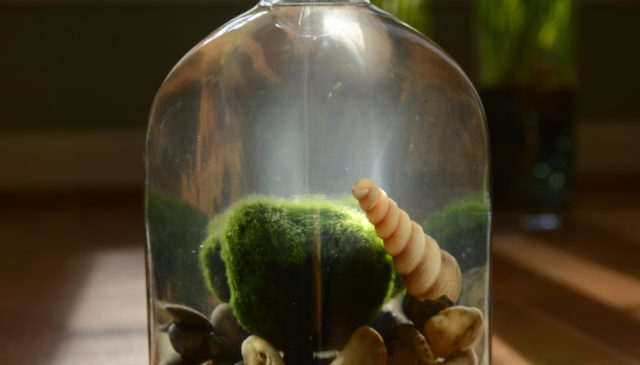 How to Make A Marimo Moss Ball Terrarium

If you are a fan of nature and love seeing it every day, you might want to consider making yourself a terrarium. A terrarium is a small ecosystem built by oneself to keep a plant in. Although this sounds easy, it could still be quite challenging. When it comes to building a terrarium, there are just many ideas that you could pour into it. There are many plants which you could use that are suitable to be in a terrarium. However, here specifically, we are going to talk about the Marimo Moss ball terrarium.

This article will explain or discuss:

Let’s get started. Here are the items you need to build a marimo moss ball terrarium;

What Is A Marimo Moss Ball

If you are unfamiliar with Marimo Moss Balls, it is a native plant from japan. It is a filamentous form of algae that can be found at the bottom of freshwaters across rivers and lakes in Japan. It is usually shaped almost like a perfect sphere with your typical green moss layer around it.

In Japanese, Marimo means “ball of seaweed”. As we all know, seaweeds need water to survive. Hence most people keep Marimo moss balls in aquariums. As a matter of fact, it is actually one of the most welcoming aquatic plants sought by humans nowadays.

Quick Fact: Did you know that some people actually treat Marimo moss balls as pets? Some even give names to them!

Before we talk about anything else, the most essential material you need is the Marimo moss ball itself. However, where could you get them? If you were to decide to find it nearby aquatic stores, the chances that you would find it is low. However, with the internet, such as eBay and Amazon, there are many sellers who actually sell them. It should cost in a range of $6 for each packet with a few small moss balls inside.

Note: If you were to purchase online, make sure that the seller is reputable to prevent any disappointments or scams. We recommend Amazon.

For the Marimo moss ball terrarium, a big jar is unnecessary. As a matter in fact, it would be better if it were in a small fishbowl. Oftentimes, Marimo moss balls spend their time on the bottom of the bed; however, it got its name as a pet due to people believing it was able to move on its own free will. Occasionally it would float mid-east of the water and drift around.

To be honest, Marimo moss balls do not require any soil whatsoever. However, you could always add gravel beneath the fish tank to improve its overall view. During the night, this gravel will reflect glamorously under your preinstalled lights.

The hard part about making a Marimo moss ball terrarium isn’t the process of making but the process of maintaining it. Did you know that they are able to live up to a span of 100 years? Some say that if you were able to live long enough, they could grow up to a foot across! However, rest assured that it would be rather tricky as it only grows approximately five millimetres a year.

Just like any other moss out there, the Marimo moss ball requires minimum lighting or household lighting. Intensive light may actually be deadly for these little beings. Another thing you should also keep in mind is to change the water once every one to two weeks. This is to ensure that your fishbowl doesn’t get too mossy.

When you see a Marimo moss ball, they are usually round in shape. However, for it to obtain a perfect sphere in the still waters of a fishbowl would be rather challenging. Hence you can consider rolling it around with your hands to get the shape you want. If you worry that it may harm your moss ball, do note that these balls were found in the river and lake beds; hence being rolled around is common for them.

Do you know what is the best companion for your Marimo moss ball terrarium? That’s right! Fishes! A terrarium is recognised due to the ecosystem that it has. However, Marimo moss balls are aquatic plants, which means that there aren’t many plants that are able to accompany them. In this case, why not give life to it by adding fish?

Betta fish and tiger shrimps are really good companions for a Marimo moss terrarium. These animals come in many bright colours and can definitely highlight your terrarium.

Honestly, all there’s left after this is designing your Marimo moss ball terrarium. The sky is your limit, so feel free to add in anything that seems fit for you. Since you are adding marine life into it, you could always get rocks and pebbles for the fishes and shrimps to hide in. This will, you would be able;e to achieve a better marine vibe from your terrarium.

Hopefully, though this, you have learned how to make a Marimo moss ball terrarium. It is actually really easy to make. The only downside about it is that after some time, it may seem a bit boring. However, consistency and patience is the key. If you were willing to start growing a Marimo moss ball in a terrarium, you should be responsible for it till the end.